Today will definitely go down in the books as far as musicians charity auctions are concerned. David Gilmour auctioned off 120 of his guitars and within around 7 hours managed to raise $21,490,750 for the ClientEarth charity. Many of his guitars broke records, and I’m certain the single guitar case listed was also a record ($175,000 flight case anyone?) with the initial estimates coming in rather low I wrote about some possible achievable buys for not too steep prices – boy were those numbers ever off. However, I do believe that I managed to pick one of the lowest valued instruments of the auction for my recommended buy.  The double neck lap steel guitar I posted about, estimated at $2,000 ended up selling for a meager $52,500. Everyone of course was waiting to see what the gavel would strike for the famed Black Strat.

On May 7th I predicted that this guitar would surpass $1,000,000 based on the $150,000 estimate from Christies, while I may be technically correct here I think I also grossly undervalued this. After seeing Lot 02 – David’s acoustic from Wish You Were Here – sell for $1,095,000, I knew my estimate was going to be a ways off of reality.

Records Broken, and then broken again.

One of the interesting points of this sale is that Lot #20 – David’s rather famous Serial number #001 stratocaster – which sold for $1,815,000 was the highest realized price at auction for a stratocaster in history.. for about 2 hours. This guitar has always interested me as a piece of Fender history as much as Pink Floyd history. The serial number of 001 would at first glance seem to imply that this is the first stratocaster that Fender rolled off their production line, this however (probably?) not the case. The history behind this guitar is rather interesting on its own. The guitar seems to be a 1954 strat, but the numbering / colors / rare pickguard make it seem like it may have been a one off for an employee or some type of special event, nobody is really sure because Fender were notoriously bad with serial numbers, as most guitar manufacturers in the 50s and 60s were. The guitar apparently was originally owned by Leo Fender, who then sold (or gave) it to Seymour Duncan who later sold it to Phil Taylor (David’s guitar tech) for $900.  David explains how he came to own it: 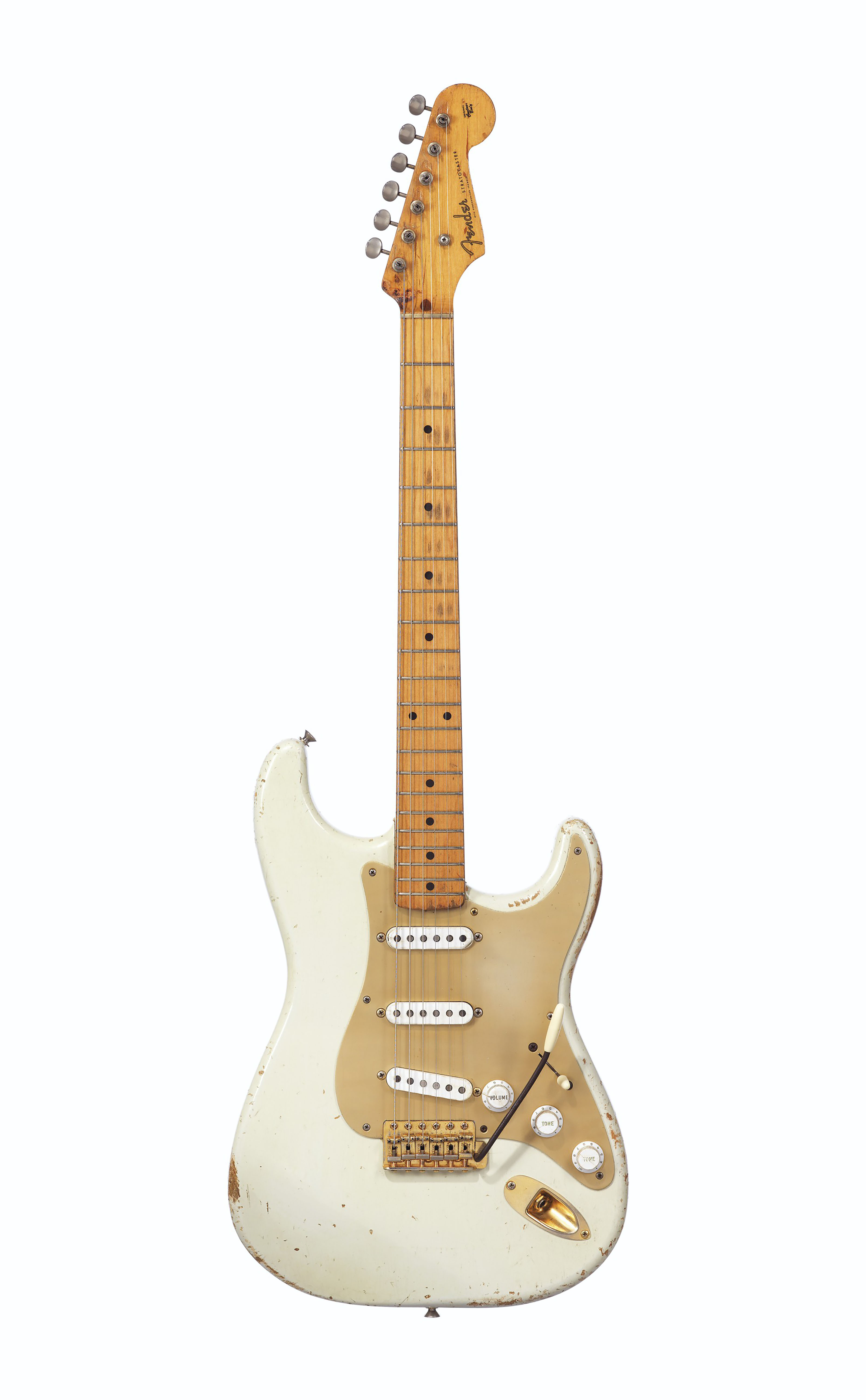 "Eventually Phil wanted to borrow some money to buy a house, so I blackmailed him! I said the only way I'd lend him the money to buy the house, was if he sold me the white Strat"

Quite a friend this guy is, huh? I bet Phil and David both probably had some worries that their storage facilities may have been woefully under-insured after these auction numbers. The white strat had its time as the most valuable stratocaster ever until the big ticket item came up, a few minutes later the auction is realized and Christie’s has the fine sense to end the whole event by playing Pink Floyd’s “Money” – Nice work David, 21M for charity should do some real good!

As a side note – its interesting that David chose not to sell this one:

This error message is only visible to WordPress admins

There has been a problem with your Instagram Feed.